Skip to content
FREE SHIPPING For all orders within mainland USA

Since I was a young boy I have always loved fishing...

I started off fishing from local wharves and jetties, with occasional trips out on the family boat. I always remember watching the charter boats bringing in their catch and weighing it at the local wharf in Paihia, Bay of Islands. I was fortunate to spend a lot of my early years in that part of New Zealand made famous by Zane Grey in his book Tales of the Angler’s El Dorado, which helped establish the Bay of Islands as a premier game fishing area.

As I got older I was lucky enough to meet a number of the skippers of local charter boats who took me under their wing and passed on their secrets. From these first early trips I can remember watching the lures and being amazed at how fish would attack them. This encouraged me to design my own lures at a tech class at school. Fortunately for me, the very first day I put MY lure in the water it caught a striped marlin. News of my success spread quickly around the Bay of Islands charter fleet and people were soon asking me to make lures for them. Soon demand far exceeded supply and I had to think of ways to keep local and national fishermen happy and thus the business, BONZE LURES was born. 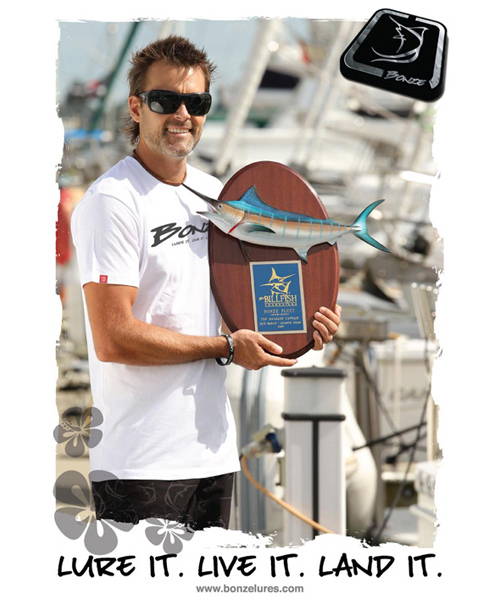 From these very humble beginnings, the business has steadily grown, as I have learned more about the art of making lures and an increasing number of captains, mates and anglers around the globe have shown faith in my products. I have refined my lure designs and lure-making techniques by travelling to the best places in the world to learn more about crafting the lures to the highest standards. I have been lucky enough to learn from the best captains and lure makers around the world, particularly in Kona, Hawaii. In addition to this, I have tested these lures in the harshest and best marlin fishing destinations around the globe.

These places include Cape Verde and the Azores. The results gained by using BONZE LURES speak for themselves. Twice I have received prestigious awards from The Billfish Foundation in the United States (2008 and 2009). Having triumphed with my lures overseas I have spent recent years refining existing and new designs, to get the best catch out on the water. BONZE LURES produce some of the best results and catch the biggest fish around the world. I am proud these lures are widely used and highly respected in elite fishing circles.